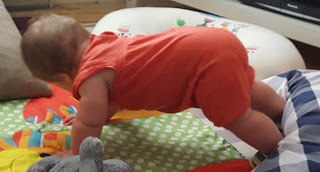 WELL that was quite the extended break from tapping away on the old keyboard wasn’t it?! Hopefully readers won’t hold it against me and the A-Bomb but we have been super busy, what with mastering commando crawls, falling off park benches, eating leaves… And launching a new business venture based on parents getting fit outdoors while their babies play in front of them.

On the crawl front M’lady has effectively shunned the standard technique, labelling it as inefficient and much too ladylike and similar to equestrian dressage. She has decided to perfect swift manoeuvres on her belt buckle in the face of any adversity or obstacle. A development from the chest-down shoulder-slither has been seen, where she pushes herself up to have straight arms while raising onto the tips of her toes to form a kind of “downward dog” yoga move. I am yet to see a full push-up or a spring into a standing position, which is somewhat disappointing.

Sticking with the subject of push-up… I have just launched a Spartans With Sprogs class under the Spartan Fitness London banner (www.spartanfitnesslondon.co.uk), which is an outdoor high-intensity fitness class that parents can bring their babies along to. The babies (all rolling or crawling but none toddling) play with toys on a large mat while their mums (so far we haven't had any dads) train hard with bodyweight exercise, weights and kettle bells. So far it has been excellent, with mums getting a real fat-blasting muscle-toning workout while the so-called “Sprogs” do their own thing in front of the adults. In fact, it appears that watching mummy/daddy run on the spot or hit boxing pads is rather hypnotising and leaves their youngster transfixed on the action. Of course now that I have tested the idea on a small group and witnessed babies on the best behaviour imaginable and on that basis decided to roll it out to a wider audience, the bigger sessions will now see crying meltdowns, turd explosions and crises that I can't even jokingly predict right now. Watch this space. 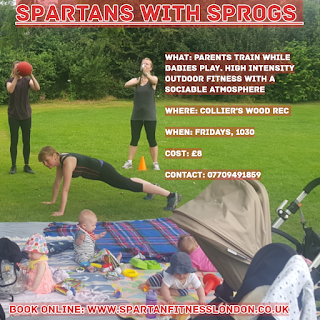 After the first Friday morning Sprogs session I received all sorts of messages from participants, firstly saying how much they had enjoyed it and secondly commenting on their inability to walk because their bodies hadn't been used to exercise. All good news! The aim of the game for Spartan Fitness London is to have people training hard while smiling, so the mission was accomplished for this first session.

A few days later the A-bomb and I went on a drive out to Runnymede to meet my friend Cara and her little girl, Chloe, plus Cara’s mum. During the drive I gave my passenger an in-depth lecture on how, while crawling and sitting in the upcoming field, she should be aware that we were to visit the place where the Magna Carta, one of the world’s most famous constitutional documents, was signed. She nodded and coughed to mark her appreciation for the information.

We plonked ourselves on a picnic bench near the lovely Magna Carta Tea Rooms https://www.nationaltrust.org.uk/runnymede/features/magna-carta-tea-room-runnymede and chatted about all the things that now occupy our lives: nappies, wet wipes, children eating soil, the work-childcare balance etc. M’Lady enjoyed her al-fresco snack with me acting as the human high-chair while Chloe ran around in the grass. All the while we were sitting on a perfectly safe picnic bench. Mid-way through our conversation Cara took stood up from her seat next to me to grab an opportunistic video of her daughter in action. Good idea. Moments later, like a see-saw, the wooden seat I was on plummeted to the ground sending me flying backwards to fall on the floor, all while holding the Lumpy Baby. If anything had been on the other end of the bench it would have been launched into the next field. So, there I was, unharmed but very much on my backside, holding M’Lady with straight arms above my head. The other two adults had moved on from the initial shrieks of “Oh my God!” and concern for our (mainly A-bomb’s) safety, to full-blown laughter, while the toddler in our congregation was genuinely upset by the whole episode. A-bomb remained poker-faced throughout but her eyes said: “Seriously Dad, will there be at least one day when you don’t make a scene, this behaviour is rather tiresome”. On dusting myself down and checking the bench for faults – the seat wasn’t screwed in – I was a bit disappointed that a team of judges didn’t emerge from the bushes holding scorecards aloft with me being declared champion of the world. Never mind. Then we got a coffee and drove home.

The next day we, along with the NCT crew, took on a mammoth route around Richmond Park. The sun was out, the deer were running wild and ice creams were in-hand, all making a recipe for a glorious day. I must hold my hand up to confess that as the tour guide, who is a regular at this particular park, I failed to factor in the different speeds of a runner versus a buggy-walker (I usually attend as a runner). Soooo, when our 1-2 hour walk became a whole-day trek, with a few restless babies wanting to be carried rather than pushed and mum's arm's nearly falling off due to the carrying, the blame lied with me. I hasten to add that nobody complained and everyone was pleased with the exercise, but I was quite aware that I had dragged some weary-legged mums unwittingly on a sweaty yomp through the London countryside.

A couple of other updates just to round of this catch-up post…
1) A-bomb has been working on a new drinking technique, when supping from both the Milk Lady and the bottle: three seconds of slurps before swivelling her head round at rapid speed to check she’s not missing out on things, realising all is well and then returning to the drink. It slows things down somewhat. This is a sign that she has inherited the incurable FOMO disease from her parents. Fear Of Missing Out is something that does not leave you, so whether it’s good or bad luck, the Lady will always want to be part of all things at all times and as a result will always be tired.

2) I have realised that female clothing often has buttons or poppers down the back of garments. Hitherto my poor child has been parading an open back in such items #wardrobemalfunction

3) M’Lady now likes to eat anything that lives outdoors – she has really been taken in by Tomee Tippee’s “closer to nature" branding. An example: My good friend Morrey visited for a coffee after I had been at a Spartans With Sprogs session and remarked that it looked like A-Bomb had something green in her mouth.

“No no, she hasn’t had anything to eat yet,” I replied, with a look of "leave the parenting to me, mate"
“Cool, fair enough,” added Morrey, doing his best not to sound like he was telling me what to do.

“Oooh there it is again… there is definitely something on her tongue.”

“Really?! Oh, she must’ve grabbed one of the green vegetables the other babies were eating on the mat,” I ventured.

I squeezed M’lady’s cheeks to check exactly what might be on her tongue.

“Ah. Yes, you are right, she does have something green in her mouth,” I conceded.

“Not a vegetable though… a leaf. Yeh, that’s totally fine. Totally fine.”

It wasn't even a lovely fresh that could double as a salad, it was more of a horrible dirty leaf. Top parenting points for me.

4) According to the Milk Lady, baby bottle cleaners (the rubbery things with soft rubber bristles) are AMAZING for washing champagne flutes.

That'll do for now... more of a catch-up in the next post!
Posted by DaddyShortLegs at 08:57 4 comments: