EDINBURGH FESTIVAL WITH A BABY part one


IT HAS been a hectic few weeks with lots going on.


I will start the catch up with a debrief on our trip to the world renowned Edinburgh Festival. We try to head up there every year to sample the comedy and culture but obviously this year was the first attempt to do it with a small human.  We knew it would be a case of trial and error. Our feeling was that of all the folk in the world those at The Fringe are up there with the friendliest and most welcoming, so a smiling baby shouldn’t really ruffle too many feathers. We didn’t plan to go to any intense plays that required utter silence.
First up we needed to get to Scotland, from London, which in itself was no simple task. We’d booked well in advance to secure First Class seats near a toilet and an exit from the carriage. M’lady is usually as good as gold but you cannot rule out a backdoor explosion OR a full volume meltdown. We would be departing London at 0800 and arriving in Edinburgh at 1215… so an early wake up, one nap, one milk feed and one solid feed on the train were on the agenda.


0530: wake up and pack my own things and fit into the one suitcase allocated for myself and the Milk Lady


0600: wake the Lady, one hour ahead of the usual schedule. At this interruption she gave mummy one solitary half-smile then was grumpy, which was fair enough. Nobody enjoys having their deep sleep broken and then being having food/milk forced down your neck. I too was miserable but would’ve accepted any food/milk.


Then came the real fun and games. In anticipation of being on a lengthy train journey to Scotland and then out and about without access to boiling water we had invested in the Tommee Tippee Closer to Nature Travel Bottle & Food Warmer (https://www.amazon.co.uk/Tommee-Tippee-Closer-Nature-Travel/dp/B002L3TEN8), which allows you to store boiling water and then use it to warm bottles. A very good bit of kit, when used properly. However, when you haven’t really tested the clever flask out and you’ve poured boiling water into it and packed it away at speed while rushing to get out of the door for 0630, things can and WILL go wrong. With everything packed up we were on for a record wake-to-exit time until the Milk Lady noticed that the flask was leaking. By noticed, I mean scalding water had dripped onto her bare skin. “fiddly dee”, or something similar was her remark.
What unfolded was a farcical scenario where Mummy and I effectively launched a scorching vessel at each other for a few minutes in an effort to solve the Tommee Tippee conundrum. Somehow we survived without blistered faces and managed to work out that the button should be pressed OUT not IN to prevent water seepage. The change bag took a hit though, with the emergency clothes, nappies and general baby-nonsense saturated. All the while A-bomb was parked up in the buggy in front of the front door*
*The baby was not in the line of fire at any point during the throwing of molten lava.
Finally we headed of to the tube station. Late. Halfway there (3 minutes of fast walking) and wifey decided that she had left A-bomb’s window open and needed to run back to close it. Off she went, at quite a pace. We pushed on, loaded with all of the luggage, much like a packhorse used to move entire households in rural mountain areas… 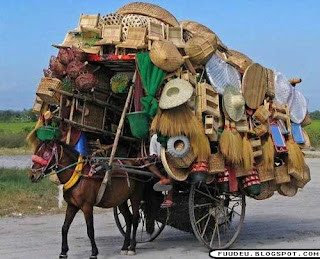 Of course when the ML returned, now saturated with sweat as well as flask water, she confirmed that the window had already been closed.
On the tube escalator (no lift at Collier’s Wood) the balancing of buggy, luggage and my the inner rage at what had proceeded was quite a challenge, but all was mitigated by the delicious wind in our faces.
0715 (felt much later): At King’s Cross station ready for our train. I was playing a lovely hand-grip game with my lovely daughter. She was squeezing my hand and then releasing it while smiling. She was so pleased with herself and I could’ve carried on all day, it was heart-melting.
0716: A-bomb ditched the hand-grip game. That was boring now. My hand was replaced by Tilikum, her toy whale.
0730: When the Milk Lady asked if I had packed the baby spoons “because that was part of your list” I replied: “No”.

Oh dear.
0740: We remained at the platform while Memory Mum zipped off to find spoons in Boots. To be honest, I think she likes to keep busy so it was good for her to have something to do*
*take cover!
Aaaand relax. We got on the train, took up our seats and set about chilling out. We all congratulated each other on our excellent decision to book into the First Class carriage… “it’s a no-brainer… food, coffee, space, tables” etc... We were those smug people for a couple of seconds. Then we released that A-bomb was accompanying us and although she’s a hero, she does enjoy being noisy and smearing food everywhere.


1100: Feeding time.
Obviously, we were in need of some hot water in order to warm up A-bomb’s bottle, but luckily enough the very friendly Virgin train staff were on their way through the carriage to top up everyone’s cups with coffee and tea. My bright idea was to request some hot water from their jug to sustain the baby passenger. I had already had a chat with the staff and they were all smiles and tickles with M’lady so I was hopeful.
“Any teas or coffees sir?” said the kind Geordie lady.

“Yes please. Also, would it be possible to pour some hot water into this container so that we can warm this bottle?”

“Oooo, I’m not sure about that, dear,” exclaimed the suddenly-very-official stewardess.

“Okaaaay and why is that?” I asked.

“We don’t do that sort of thing I’m afraid.

“Oh, let me see if I’ve got enough after I’ve done the rest of the carriage, but I can’t promise anything.”

I added: “I’m happy to get some water from wherever your kettle is but I’m assuming that you won’t allow that.”

“Oooo no, we can’t have boiling water being carried through the train. I will have to see what I can do.”
And with that, the ex-good natured woman was gone, on her duties to feed and water the adults. Meanwhile we had a hungry baby that was not too far away from kicking off in a big way at the lack of correctly-heated milk on offer.
Managing not to throw a complete wobbly of my own, but quite enraged by nonsense I had been fed, I poured my coffee into the Tommee Tippee vessel and warmed the bottle in my own unorthodox method. I felt like a railway Bear Grylls.
Moments later the Train Manager – probably a just a few rungs down from Ricky Branson himself – wandered down the aisle. She noticed my empty cup and then the brown liquid heating up the bottle.

“If you’d have asked one of the members of staff they would have got you some water.”

“I did ask and it wasn’t possible,” I replied, smiling.
“The stewardess needed to make sure there was enough coffee and tea for everyone first.”

“But we could fill your flask up in the kitchen,” said the boss.

“Nope. Not until she is finished and it’s too dangerous for me to carry it. Don’t worry we’re fine here.”

The supremo smiled, apologised and then shot off in the direction of her workforce. One presumes she kicked the old bat out of the moving train. Shame.
To be honest the whole episode was quite comical and entirely predictable given this country’s poor attitude towards babies in public. Thankfully A-bomb was pretty chilled about the whole thing and didn’t mind her drink being a bit on the tepid side of her usual standards.
On the solid food front we didn’t brave the likes of a lasagne, Bolognese or yoghurt… it was more of a muffin and rice cake affair. Still pretty messy but acceptable. In fact M’Lady’s manners, noise levels and general hygiene were a cut above that of the oversized fellow that joined our table at York.
Let’s put it this way, the chap hadn’t had a bath for a while and found it a struggle to move his own body when it became wedged under the table. Aside from the reduced space and the overwhelming stench I was happy with this situation because it meant the eyes and noses of the carriage were drawn away from my dependent.
We arrived in Edinburgh on time, dumped our luggage at one of those locker room places (for an unreasonable fee) and headed to the promised land of The Pleasance Courtyard, one of my favourite places on earth.
We had made it. Next stop comedy.
More on the Edinburgh Fringe to follow!

Posted by DaddyShortLegs at 01:25 No comments: