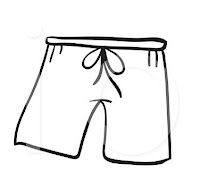 YOU know the guys who are so desperate for you to know that they attend a gym that they walk like they've had a toilet accident? You know, the ones who "lift bro" and demonstrate that fact by waddling like a duck carrying a small coin in its feathered bum cheeks? Yes, well thanks to A-bomb's swimming class, I became one of those people today. Obviously it wasn't my fault that I forgot to pack my own underwear during the ridiculously quick preparation of the change bag vortex. Didn't leave enough time did I... Didn't factor in the need to make up a bottle for before and after swimming, deal with a new nappy situation, find socks, pack towels, pack swim nappies and pants, get myself dressed appropriately for society, put The Lady in her car-seat, find her socks again and put myself in the car. In that hurried hurricane of handbag administration my boxer shorts were never getting remembered. My poor inner thigh region would be left to suffer the chafe.

Before the realisation that I was sans pants the swimming lesson at The Baby Swimming Company (http://thebabyswimmingcompany.co.uk/) was brilliant. As with all of these baby classes I now attend I had been before, but just as the onlooker and not shouldered with the responsibility of not messing things up. For some reason, screwing up in the pool had been playing on my mind, not because I thought I might drown a baby (that would be less than ideal) but because M'Lady had been doing so well and I didn't want to slow her progress. Let's be clear, this was not splashy splashy fun and games, this was hardcore teaching a very small person to swim and be safe in water, with a lot of fun thrown in. I'm under no illusion that in approximately four weeks the little stinkbomb will be a more proficient swimmer than me... unless I get some sneaky lessons of my own. That'll show her.

Under the expert tuition of the instructor I was straight into submerging my daughter, before releasing her and awaiting her safe arrival back in my arms. That went better than I expected and from then on I was basically on fire – much aided by the fact that A-bomb was nonplussed by the whole "going under" thing. As this was Level Four, a far cry from the quick dunks that I'd witnessed in Level One, there was no messing around and soon enough my six-month-old was being invited to swim unaided. There's no armbands here. Ever. Yep, firstly the instructor held her, then gently pushed her forward, completely letting go, then I was asked to carry on. Mental. But absolutely spot on. All of the kids did it and without any guidance it was completely natural for them to start kicking their legs and using their arms as a means to stay afloat. Obviously we stepped in after a few seconds before they started to sink but still, I was amazed. The lesson ended with an insight into what we'll get to in Level Five in a few week's time.. "dive dive", the instructor said as she picked up each baby one by one, lifted them over her head, tipped them up and sent them headfirst into the water. "Dive Dive" indeed! What the devil will they learn in level six, a back-flip off the top board? Hope so.

After a quick feed, it was back home for a snooze. Not sure what she did but I was knackered. I jest. But I was tired.

The solids sessions was a roaring success as she tucked into a smorgasbord of vegetables and beef via a Hungarian goulash. The pieces of beef may have had a similar toughness to the sole of an old boot but she sucked the life out of them with a smile on her face. I looked forward to the nappy.

To celebrate another great day at the office I treated my favourite child to a Sky Sports round table interview with boxing greats Steve Collins, Joe Calzaghe and Richie Woodhall. She loved it.